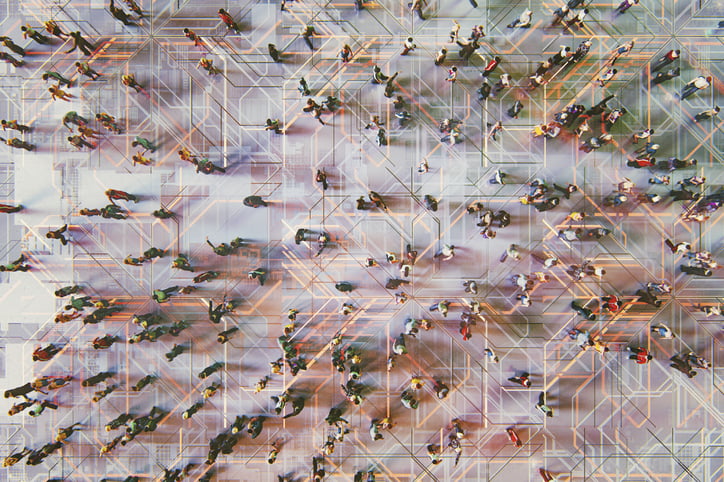 The Data Catalyst Institute is dedicated to understanding the data-driven world. The complexity of understanding the myriad ways in which data has transformed privacy, communications, commerce, and other broad areas of societal importance has necessarily led to new jargon. And because the topic is cutting-edge and fast-moving, in many cases there is no obviously trustworthy resource to define its peculiar terminology. Where there is such a resource, it is frequently contained within a larger technical discussion of law or policy.

In this DCI Quick Guide, we define a set of what are becoming common terms in discussions of the data-driven world that frequently intersect the world of lawmakers and other policy stakeholders. (Note that these are not strictly legal definitions nor should this post be construed as legal advice.) In some cases, we link to high-quality recent publications on the topics.

Data-driven Economy: The commercial flow of data within and between platforms, organizations, jurisdictions, and nations that has rapidly enabled companies to globally hire, analyze, manufacture, market, and sell in ways that were impossible just a short time ago. The Data-driven Economy is, in essence, the modern economy for many companies in many countries around the world. Companies of all sizes can achieve massive efficiencies and reach, while consumers can seamlessly obtain better, cheaper products and services from either the other side of town or a world away.

Data Regulation: The act of regulating how people, organizations, companies, governments, or other entities gather, store, analyze, share, sell, or otherwise utilize data, within and across jurisdictions. Data Regulation is incredibly broad because in the modern world virtually every entity creates, shares, and uses data in some way: Even the relatively simple act of ordering a hamburger for delivery on your smartphone involves a complex web of data creation, sharing, and storage between you, your phone, your map provider, your phone carrier, the delivery app, and the restaurant.

Data Consent: The voluntarily, freely given, specific, informed and unambiguous permission given by a user for an entity to process their personal data.

Informational Injury: The concept of harm that consumers suffer due to privacy and data security breaches or similar misuses of their data.

Data Interoperability: The ability of different software systems to have clear, shared expectations for data content, context and meaning.

Regulatory Patchwork: The assortment of varying data regulations across nation-state, geographical, or other jurisdictions. This can be viewed as the antithesis of the value of consistent regulations across jurisdictions that many organizations find desirable. As global regions (e.g., the EU), nation-states (e.g., India), jurisdictions within national boundaries (e.g., California), and other jurisdictions each adopt their own Data Regulation practices, the Regulatory Patchwork becomes more complex. This can be very difficult to stay in compliance with, particularly for smaller entities.

Data Nationalism: The effort by nation-states to exert control over data for a range of normative and security-based reasons. Data Nationalism is on the rise around the world, but the purpose, nature, and implications of this trend vary significantly, ranging from national security and law enforcement objectives, consumer protection concerns, bolstering domestic innovation, and other reasons. Similarly, the nature and effect of the measures vary significantly as well.

Data Localization: The notion of requiring data to be stored and processed domestically (i.e., where the data is generated), and the downstream effects and costs of doing so. This concept is slightly different from but very closely related to Data Nationalism. The DCI White Paper by Jennifer Daskal and Justin Sherman, Data Nationalism on the Rise (June 2020), significantly expands on the previous two topics.

Data Controller: The organization or person which defines and determines the purposes and means of the processing of personal data. For simplicity, you might think of a tech platform such as Facebook or a government agency that overtly collects people’s data like the DMV as a Data Controller. In reality, there is a lot of nuance and complexity to the term that goes beyond the scope of this post.

Data Portability: The concept that allows users of tech platforms to retrieve their personal data from data controllers and transfer it to other such controllers. Data Portability is an interesting and somewhat controversial concept currently being discussed by experts and policymakers around the world. A key topic of discussion concerns what exactly one’s “personal data” consists of. For instance, if a user uploads a photo that is their photo. But what about someone else’s ‘like’ or comment on their photo? What about a platform’s code or analytics attached to the photo on the back end? The October 2019 DCI White Paper by Aparajita Srivastava and Nehaa Chaudhari, Social Graph Portability: An Analysis of India’s Approach, significantly expands on this topic, with a focus on proposed Right to Data Portability or “RDP” legislation in India.

Digital Trade Barriers: Restrictions on the free flow of data that effectively act as trade barriers. In some cases, factors such as Data Localization, data privacy requirements (like GDPR), IP-related issues, censorship, and traditional trade barriers like customs create digital barriers to commerce. The U.S. International Trade Commission has estimated that removing such barriers would add tens of billions of dollars to the U.S. GDP annually.

Data Dividends: The concept wherein companies share profits derived from the use of personal data directly with the users who provided it. Data Dividends is another interesting and somewhat controversial concept being discussed by many experts and policymakers (for example, California Gov. Gavin Newsom in Feb. 2019). Theoretically, getting paid for use of one’s personal data could lead to clearer privacy rights, new sources of income, and some other benefits. However, Data Dividends are difficult to implement, may slow down innovation, and could lead to a separate set of inequality issues. This new DCI White Paper by Tarun Wadhwa, Economic Impact and Feasibility of Data Dividends (June 2020), is a terrific and well-rounded review of the concept.

Data Economics: The strategic shift in perspective about the very nature of commerce and markets to a data-centric one about the inherent value of data, the nature of the Data-driven Economy, and the effects of regulation on that economy. Modern commerce is about more than just goods and services. It is about the data underlying these goods and services. The flow of data between people, businesses, organizations, and jurisdictions is critical to global economic growth and progress. However, this must be balanced with the proper privacy protections and other regulations to protect that very data. This intersection between economics and business, privacy and regulation, and innovation is where Catalyst Research specializes its work with clients. This new perspective has already disrupted the thinking, planning, and actions of both business leaders and government lawmakers and regulators. As these stakeholders wrestle with the complex questions of data’s inherent value and the ability of markets to drive both competition and innovation in the digital world, a solid understanding of the inner workings of the data-driven economy will be critical. 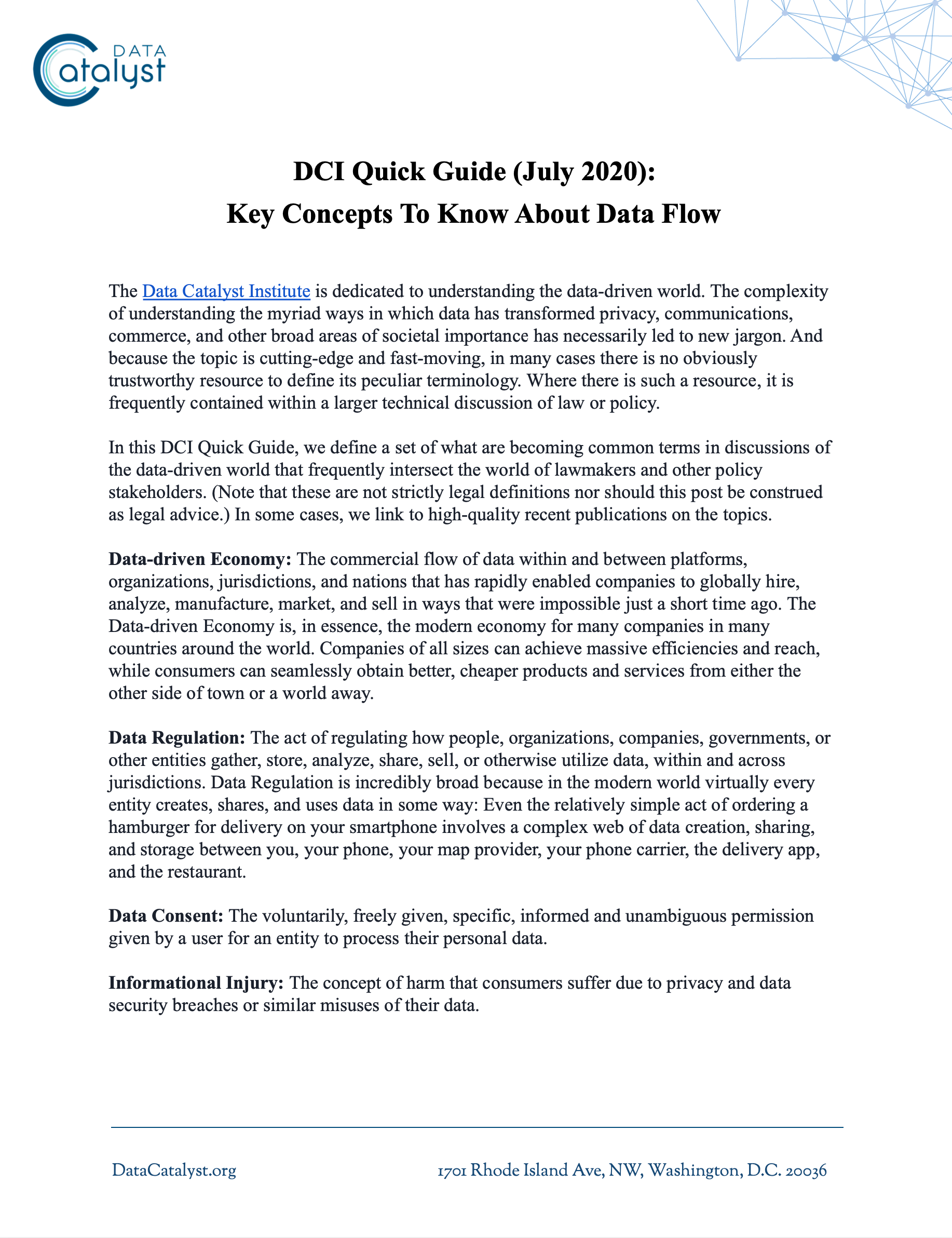